Has an excellent condition NS22 featured.
Posted by NS22 at 5:37 AM No comments:

After being evicted from my own home, I spent a few days with friends in the country.

Going up Mount Alexander, I found 1st gear to not be low enough for my liking, so did a fair amount of walking.  Maybe a smaller front chain ring could be my next modification.

An un-photographed trip I made was Frankston-Baxter-Somerville-Stumpy Gully Rd all the way to Balnarring Beach, then back and up Two Bays Road (walked up there) and back to Frankston via Humpries and Overport Roads.  On this trip I was alongside a bike with a GPS, our speeds agreed.

Coming down hill from Mount Alexander, I hit 70km/h, no pedalling required.  The previous record was 62 down Olivers Hill, Frankston, pedalling (about 180 per minute, according to my calculations).  Descending Mount Alexander at that speed was probably a silly thing to do, it being a winding road that I had never been on before, still, I lived to tell the tale. 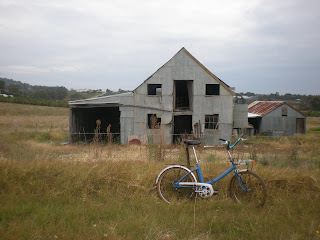 Maybe I could live in this old shed?  I passed by this on the way from Harcourt to Mount Alexander. 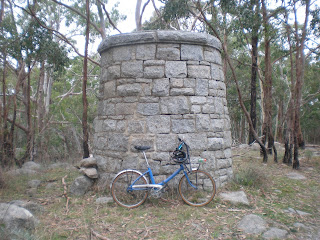 This stone thing is at the top of Mount Alexander, named after Alexander the Great.  At the left can be seen a pile of stones, I stood on these and climbed a bit, there is nothing special to see on the top. 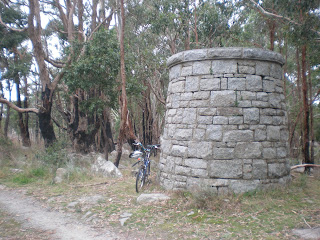 The night I was packing to return to Melbourne my wife rang and told me to expect to be met with locked doors.  I hung up on her and proceeded.  After three weeks sleeping on my son's top bunk, I was told my wicked ways were unbearable for her and was told I must depart.

I guess this was a good 42nd birthday present....

The right time for a mid-life crisis....

These photos were taken at Southern Cross station.  I think I preferred the old Spencer Street station.  I did not ride the bike with all that on, but it was good for walking between platforms.  I traveled by bus from Melbourne airport to the train station. 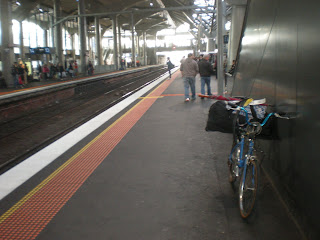 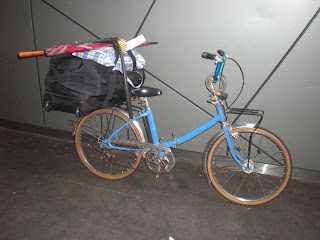 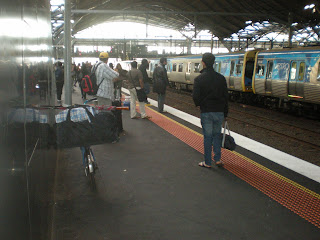 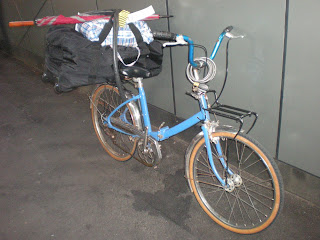