Another trip to Yirrkala

The bike computer said 20.19km in 55 mins, non-stop this time, left Nhulunbuy just after 9am, arrived just before 10am at the Yirrkala art gallery.  This was Saturday 19 March.  It was getting hot the last little way.  At Yirrkala I met someone I knew and got a lift back to Nhulunbuy in a 4WD, 80 series Toyota Land Cruiser, 4.2 litre diesel.  Probably another world first, NS22 in back of 4WD Yirrkala to Nhulunbuy.

On arrival at Yirrkala I leant my bike against a tree, it fell over.

None other than Djambawa Marawili happened to be nearby and alerted me to the bike fall.

He had just returned from Sydney, where an exhibition of his works had just been opened.  I spoke with him for about 10 minutes, he said the coming of the mine 40 years ago had its good and bad points, it brought drugs and alcohol, he said "many people did not look after themselves, they let their children run around like mad dogs". 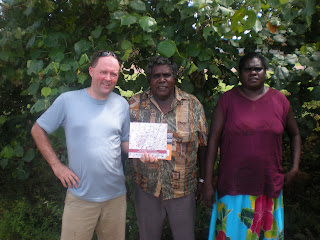 The gallery gave me a catalogue of the Sydney exhibition, Mr Marawili kindly signed the inner cover for me.  I helped him load his bags into the car that arrived to transport him and his wife (also pictured) away.  This gentleman is both wise and talented, I recommend his art works to everyone.  I did not speak with his wife, but no doubt she is also an accomplished artist.  Her works are also exhibited in Sydney.  Her name is one of the two on the back cover of the catalogue I am holding.  I meant to hold it the other way, Djambawa Marawili is the name on the front.
Yes, so now you know, middle aged bald men ride NS22s in the Northern Territory.  Along the way I saw a buffalo, a few km before Yirrkala, but one look at the NS22 and it took off in fright. 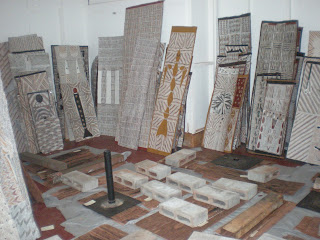 Some of the artworks displayed at Yirrkala.
**
A Nhulunbuy neighbour kindly sprayed my bike chain with some motorbike chain lube.  It was getting a bit squeaky.  The NS22 has done 678.6km since I fitted the computer.  I need to oil other parts also, I have acquired about 200ml of motor oil in an old jam jar just for that purpose.
Posted by NS22 at 2:04 AM No comments:

On Sunday I went out to see what delights could be found at the local tip.

I skipped the bin for fish and cane toad refuse.  I found a pile of scaffold clamps and old welding rods, they seemed too good to leave behind, also seemed a good trial of the load carrying abilities of this machine.

It was about 6km each way, 16mins to get there, 20 coming home.  The crate was certainly well loaded and has bent with a few minor cracks at the base.  I was slightly afraid the steel rack might collapse, but it has no signs of distress.  I weighed all this junk and it, together with 1.5 litres of water, was at least 30kg, maybe 32.  I would not recommend this, it could get a bit of a wobble on the steering.  I was careful to avoid large bumps.  I would think 10 or 15kg is fair enough for general use on the front rack. 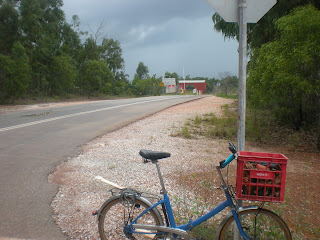 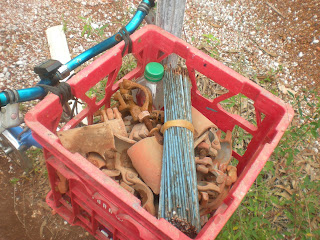